Book review by A. Jones of: 'Black Magic Evocation of the Shem ha Mephorash'


Black Magic Evocation of the


Book Review by A. Jones

Black Magic Evocation of the Shem ha Mephorash by G. de Laval is published by Aeon Sophia Press and limited to 200 hand-numbered exemplars of the standard edition, in quarter leather bound and dark grey moiré silk, 264 pages, 120g paper. The Deluxe Edition has full black leather and marbled end-papers. Both Editions have silver stamp and lettering displaying the Conjuration Circle of the Three Witches of the Crossroads, by the author. 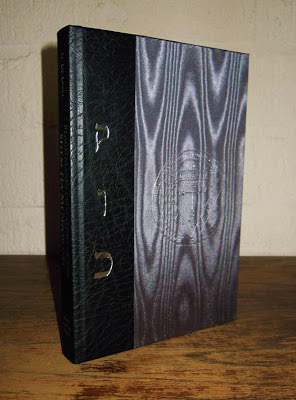 The author of this his book combined his research and personal practice, developing a new method of work with the Shem Ha Mephorash Angels. He has constructed a Qliphoth of Baphomet which collects, corrects and updates commonly circulating data to streamline its function as a graphical transmitter of energy from a larger system of witchcraft which will be treated more extensively in a future publication.

The Shem ha Mephorash or Explicit Name is a 216 character secret name of the creation consisting of list of 72 angels, whose names are derived from the from the Hebrew letters in Exodus 14:19-21 (Chapter 14, verses 19 to 21), The Book of Exodus is part of the Hebrew Tanakh (Christian Old Testament). The verses 19 to 21 in the original Hebrew have 72 letters each.
Each Shem Ha Mephorash angel has a three Hebrew letter name, which is ending with the suffix El or IAH.

Each Shem Ha Mephorash angel has a Sephirotic form with connection with the Tree of Life and also has a shell/ Qliphothic forms with links it to the Tree of Death.
The author also proposes a change concerning some Qliphoths denominations, his thesis is that the “Qliphoth are imbalanced bastardised shadow emanations from the Sephitoth” and that they are not what they seem, as per their constant distorted movement. 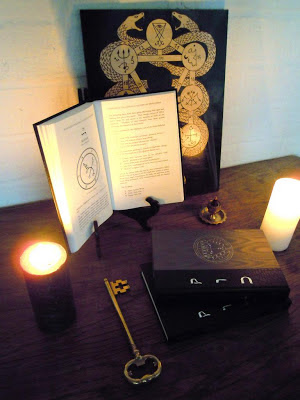 The author provides three methods of accessing these Angels, one example case, and the description of the Tools that are useful, which the reader might want to use during the Rituals. On the appendices there are many tables of correspondences resultant from his research of various calendars from the mystical schools of cultures around the world, the information presented was decrypted and mined from dozens of ancient Grimoires and books of astrology in the Western occult tradition.

To facilitate the understanding of the ideas conveyed in his book, the author provides definitions for most of the words and terms he uses throughout this volume, inclusive for the Shem Ha Mephorash Angel pages.

This should be an interesting book, in a way of promoting more thirst for Knowledge, inciting  people who study or practice Goetic magick, Vampiric Sorcery, Necromancy,  Black Magick, Conjuration, Traditional witchcraft, Luciferianism and Satanism, to go deeper in their research for the understanding of the energy currents and how they relate to each other. For more information, see his upcoming Grimoire Liber Sethur.

'Black Magic Evocation of the Shem Ha Mephorash' is now available via: www.aeonsophiapress.com

Posted by Aeon Sophia Press at 1:23 AM

A Peak Into The Hermit's Lair: Inception & Transgression.


[Review of 'Whisperings from the Void: The Amaranthine Arcanum of Holy Image and Revealed Exegesis',
from Patrick John Larabee. -- By G. McCaughry (Anathema Publishing) - MMXII] 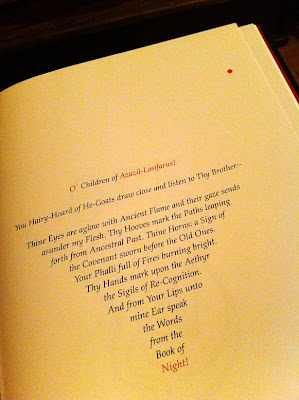 Introduco:
How does one quantify personal experience? - Well, somehow, 'Whisperings from the Void: The Amaranthine Arcanum of Holy Image and Revealed Exegesis', Patrick John Larabee's first published manuscript in the form of a whole book (courteously released via Aeon Sophia Press), attempts and aims at answering this sempiternal question and proposes a thorough and undeniable observation concerning that which is the Witch's only true salvation and key motto; in essence, the Ways, Wants and Woes of the Wayfarer treading the Hermitical Path of Mysteries... And Mr. Larabee does so with the care and attention of a true believer, or better yet an astute student and researcher.

'Whisperings from the Void' is not a Grimoire per se, even if there is enough Gnosis within to readily constitute various components of a Greater Grimoire (perhaps in time?). The crux of the oracles here-presented speaks about the results of various devotional operations/prayers and is an authentic outlook into the Magickal Arte, moreso a direct and heartfelt access into one's own private praxes and syncretic relation with the Wyrds of Umbris.

In many ways 'Whisperings...' stand as an initiatory/introductory work into the Arte, however, some parts are clearly meant for those already in the "Know", as some invocations will often not be accompanied by any explanatory texts, forcing you to experiment on your own instead.

'Book I: Hermitus Pathos', is in itself a motivator, oiling the engine of the Adept and sparking the Flame; with invigorating essay-like texts and litanies helping us to renew with the Arte and generate deeper interest, therefore helping us remember why we came to answer The Calling in the first place, realizing the potential lying dormant inside, and supporting our very foundations and layers as Will-full Individuals.

A huge emphasis has been put on the role of the "I" within the Cosmic Order and the Demiurgic Schema, and thus what constitute our Inner and Upper Self, as a reflection from behind the Void's ghastly shroud. The fascination for the "Eye" throughout the Book is another indicator that the words offered within aren't plainly spell'd to be read but are purposely meant for us to "see" & "behold". 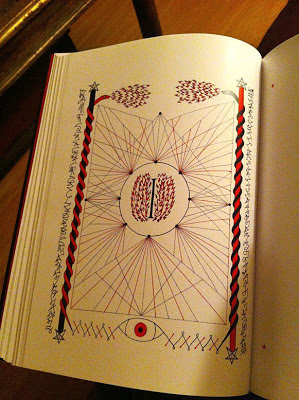 Simply put, the book doesn't need to take you by the hand to show you the (or a) way to go about the Path. It rather opens a door and lets you in for a peak, leaving you wanting more. (If you catch my drift.) There is no pretension to educate here, nor even a deliberate attempt at any spiritual guidance really, so long as the Absolute portrayed within these pages remains apparent and flowing seamlessly out from the various texts and illustrations. (The illustrations, by the way, are honestly wonderful.)

Texts of particular interest within Book I., to my own humble opinion, are: “Seeing the Unseen: being beyond the self: The Eye of the I” (also featured in PILLARS I - “Psychopompos”), “The Emanation and Inheritance of the Sorcerous-Fire”, “Corpus-Cask of the Dynamically Aqueous Soul” (love the title!), “And the Shadow is cast...”. 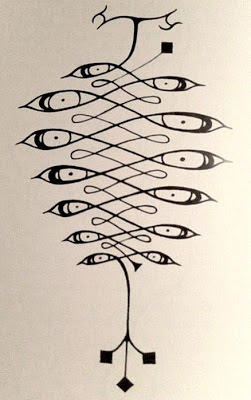 * I think I may have this one inked as a tattoo someday...

'Book II: Libra Ab Sanguis' truly stand as a monumental acknowledgement of both the Spirit of Truth and the Truth-in-Spirits, of the HolyMost-"I" and of Mother Nature combined, and it is an especially vivifying pact of devotion, for care has been put into every small poetic oraisons and I am glad this "part" made it whole into 'Whisperings...'. (The "Invokations of the Watchtowers of the Universe" are especially poignant.)

This, is a work of close-proximity, I'd even say intimacy, as if this work is at arm's length in terms of accessibility, being of malleable and adaptable content, which is somehow contre-courant to certain books focusing more on astral soaring and ascent, this one has instead, a more terrene and solemn overall tone. 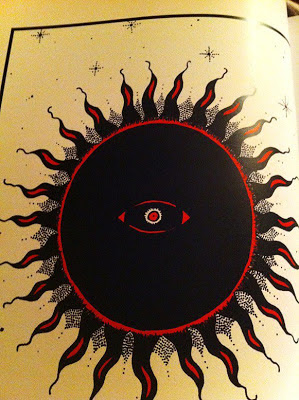 Of the numerous pictographs:

In many ways this tome could also serve as an artist's portfolio (in this case the author's). Mr. Larabee's sigil work is always very-well woven together, cohesive and stunning by the effectiveness as you can literally feel the energy speeding through them. Given, his artistic style and fashion may not be to everyone's taste, but it is certainly always on-point and moreso exude a tangible passion for the portrayed Daimon and its concordant seal. There is a certain innocence of character in the way he goes about his drawing and painting, and I mean that in the best possible way, for here Innocence is synonymous with Purity; a style untainted by the popular way most come to expect the Veiled Masters to be depicted. 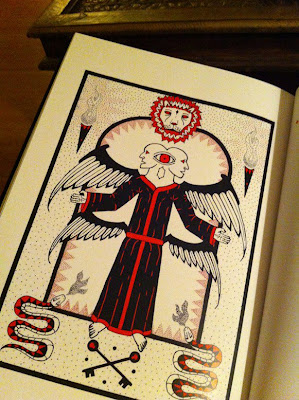 My personal coup-de-coeur certainly goes for the various sigils and illustrations done for the 'Book of Emanations' ('Book II: Libri Ab Sanguis', of 'Whisperings...'), to me,  they are the most evocative pieces within The Book; actual, embodied manifestations of the Dark Shadows-Made-God since times immemorial, and are very powerful symbols in-deed.

Conclusio:
I started this review, or rather mere stating of facts (albeit from a subjective standpoint), with a Question and I shall try to conclude by suggesting an answer, or perhaps a hypothesis. - There is no need to neither quantify nor qualify personal experiences. Nor is there any actual obligation when it comes to the sharing of these. But when One goes about to let the words bleed honesty on paper, the cautious reader should definitely pay attention, for this is a rare gift nowadays.

This offering from Patrick J. Larabee is a balm on the Souls walking the Path of Revelations, barefooted on the burning ambers of the charred and dying presumption that a book of such magnitude shouldn't be an enjoyable and easy reading from the get-go.

On a slightly bitter note, I wouldn't be honest with myself if I would not mention that one thing that kind of marred the reading experience at times, is the sheer amount of typos throughout the book. Of course, there is always a lot of these getting left behind in any books, but I guess a more thorough review of the manuscript first could've easily prevented the ones I noticed from making it into the final printed version. Same goes with the handling of some of the technical graphic specifications needed to be observed when including images that are bound to go to print. (Such as to include illustrations at a high enough resolution to make sure it doesn't come out pixelated or not "sharp" enough.) - I believe the actual size of the book itself isn't the best of choice when it comes to format, for me, it is simply too large, which makes for a slightly difficult handling when reading and forcing a bigger typefont size that I would have normally deemed fitting for such a book.
(Also, some of the Illustration's names are sorely missing from the List of Illustration at the end of the book... strange?)

It is my most sincere hope, to a fellow occultist and friend, to see this tome soar past the first edition and thus see it eventually revitalised with some of the technical aspects of the product itself, enhanced and rectified. But despite these few flaws, 'Whisperings from the Void' is a strong and solid first entry in the domain.

The Hermetic Realms are indeed vast, and Mr. Larabee, with his 'Whisperings from the Void', proves that an additional soldier-soul in the foray against the ignorant minds of our time trying to shield the Many against the Truth delivered by the Few, is always a very welcomed present for us all who are genuinely interested in the matter.

Posted by Aeon Sophia Press at 2:18 AM

Two new books are currently in the works to be published: a book of art and drawings & sigils and text giving insight to the artist's occult philosophy. And a book containing a collection of Satanic verse, accompanied with a stunning lay-out design. Both books will be made in a clothbound hardcover and a full leatherbound deluxe editon. An official announcement will be made in the coming weeks, names and titles will then be revealed. www.aeonsophiapress.com
Posted by Aeon Sophia Press at 5:20 AM